Go to my Queen's Park Book Festival blog post here You've heard about the stand-off on Wednesday 16th May at Kensal Rise Library between library supporters and Brent council staff attempting to empty the library of books etc? 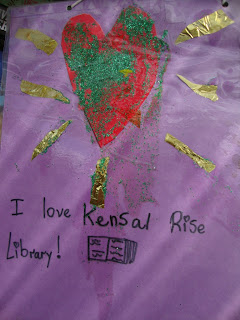 This is the latest news (Friday 18th May)from David Butcher of the Save Kensal Campaign I spoke to Muhammed Butt, the new leader of the council, earlier and followed up on the events of yesterday. He is making very positive noises as far as they go. He is keen to build bridges with our campaign and find a way forward. He reiterated that he wants to arrange a three-way meeting with us and All Souls, although his legal advice is that the reverter has been triggered and All Souls have acknowledged as much. However, nothing more will happen in terms of the transfer of deeds for now. He wants to meet with us (just us, initially - tripartite meeting later) next week and no clearing of the library will happen before then, he says. As regards the books, he says he needs to allow them to be taken and redistributed, and the council also needs the computers. I argued the point on books and we can argue further next week. But significantly he agreed that the council would not remove shelves, tables or chairs. And he will make sure they don’t remove the large murals painted for the library, which is great. So the property transfer is on hold and we have a chance to take stock. And for once there's the prospect of face-to-face discussions on a way forward. Obviously we need to be careful that Mo (as he is known) is not buying us off with bland assurances only to sell us down the river later. But so far so good. Huge credit to everyone who fought our corner and gave quotes to the media yesterday. Terrific coverage across the board today, and I'm sure that has had an impact within Brent. Also big thank you to those of you that sent emails to Cllr Butt. That's the end of David's message. This is me again! Thanks to twitter word soon went round about what was going on and a sit-in, lie-in, read-in and stand shoulder-to shoulder-in was in place. 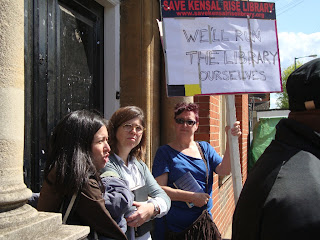 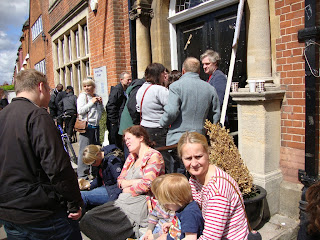 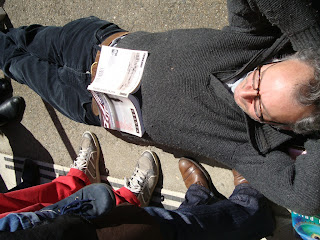 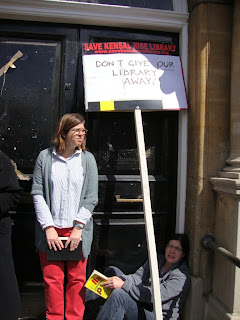 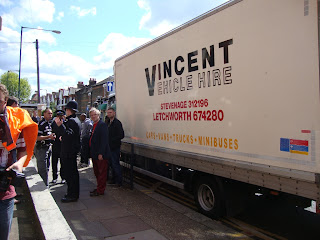 Margaret Bailey summed up the events of the day in a message which is so good there's no point in me re-writing it
Hi Everyone,
Firstly, thanks for the magnificent response to the attempt by officers of the council to remove the books from the library today. Another great holding action.

And not just remove the books. The murals that were painted specifically for Kensal Rise Library in the 1930's are also propped up ready to be taken away. For display in the new £3 million library in Wembley? To remind them of the libraries that they closed? To be pulped? Who knows? Our very own Elgin Marbles!

It is just amazing how all of a sudden when the library is under threat people seem to materialise.

Thanks to your support and action and the intervention from Cllr Mohammed Butt, the new leader of the council, the council officers left the building without removing any of the books.
It would be very good if you could email him to thank him for his intervention on our behalf, cllr.muhammed.butt@brent.gov.uk and also to remind him of the importance to this community of our library. He said he did not know there would be an attempt to strip the library today.
Hopefully we can look forward to a more conciliatory council leadership than the one we have known for the past 18 months. And our fingers are really crossed on that one.

The danger has not past and we need to be vigilant about the library.
Cllr Butt is said to be trying to organise a meeting between us, the council and All Souls, and we will also continue with our own negotiations with the college. Wouldn't it be fantastic if negotiation was the way forward, rather than the hostility and intransigence we have known during this campaign?

If it was thought that the campaign had gone away, today's action would dispel that notion.
Regards to all and job well done for today.

And another great report by the Kilburn Times 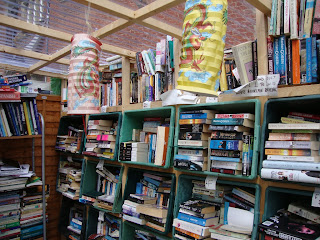 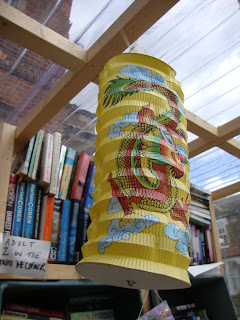 And on World Book Night (23rd April) there were readings and World Book Night give-aways at the Library which I didn't have time to blog about yet.... Despite the cold and damp it was a great event, and the Evelyn Waugh letter was really funny (click on the link in the photo caption) By the way, if you like letters, there's an excellent website Letters of Note by Shaun Usher, where he publishes "correspondence deserving of a wider audience". Shaun's on twitter too @LettersOfNote

I'll say more about why I chose Meg Rosoff's "How I live now" as a book to give away on World Book Night once the Queen's Park Book Festival is over
Posted by Elaine at 04:50 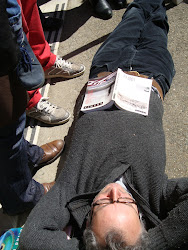 Untidy but productive veg gardening May 2012

Brent Friends of the Earth